I don’t know about other languages, but these two verbs  can be easily confused in 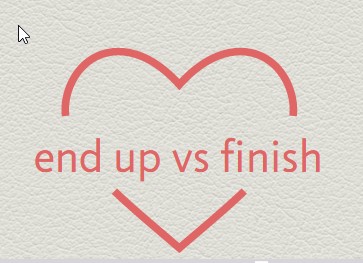 Very often, we  see this kind of mistakes:  We missed the bus and finished taking a taxi .

So what is the difference between these two verbs? How can we use them?

– if you end up somewhere, you eventually arrive there, even though you did not originally intend  to go there.

Many of his friends ended up in prison for different crimes

– if you end up  doing something or end up in a particular state, you do it or get to that state even though you did not originally intend to.

We missed the bus and ended up taking a taxi

I f the crisis continues, we will end up with millions and millions of unemployed

-If you finish, or finish something you are doing, producing or dealing with, you reach the end of it, so there is no more for you to do, produce  or deal with .

When we finished eating , we left

– When a  course, film, sale, etc finishes , especially at a planned time, it ends

The course starts in September and finishes in May

The good news is that both verbs are followed by gerund so, you see, here you can not make a mistake.

See how the following sentences are translated

Have a look at these quotes now and pay attention to how these two verbs are being used. Which quote do you like best ? Why?