After over a decade of running this site, if I have developed one signature post, I would say it’s ideas to bring to life content from the course books.  That’s, at least, the posts I enjoy writing the most.

But, in this post, the star of the show is grammar and the featured tool is one of my favourites, for its versatility and visual impact. I am sure you all know and tried and fallen in love with Genial.ly, so I am not going to waste your time or mine talking about it. 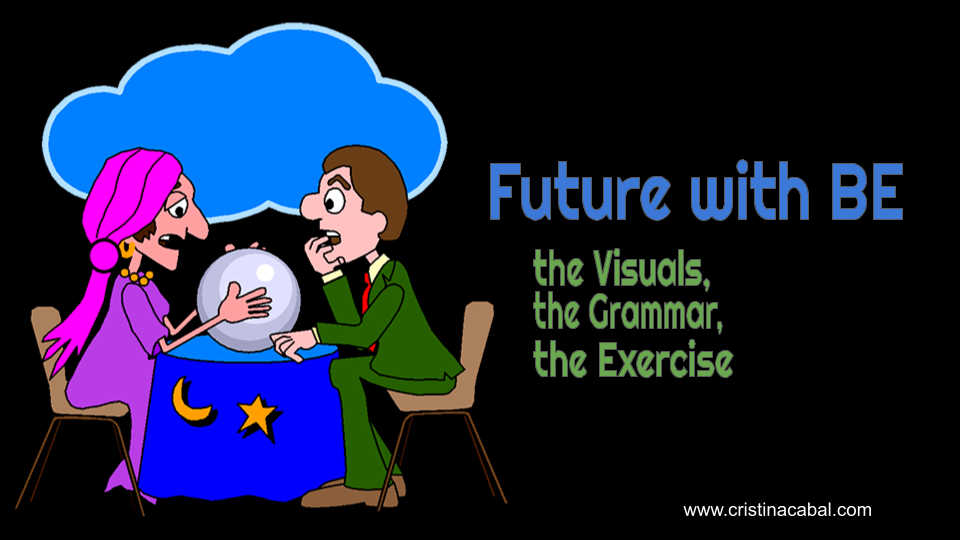 Whether explaining grammar or doing a speaking activity, visuals play a very important role in my teaching. Is it the same for you?

Finding the right visuals to accompany a point of grammar is not a task you do in the blink of an eye; it takes time and it is never entirely fulfilling as you are left with the feeling “there should be a better picture to represent this if only I kept looking”. Unfortunately, time is tight and sometimes you just have to make do with what you have.

Without further ado, let me introduce to you the visuals.

After writing on the board the point of grammar we are addressing –the future with the verb “to be”– and eliciting some structures they might already know, I display the first picture.

Now that students are familiar with the structures, let’s jump right into the grammar. Rules should be very easy to understand now.

You can even divide the class into two teams. Display the first sentence, give them a minute to rewrite the sentence using the future with the verb to be and then ask Team A to challenge a student from Team B to say the sentence. If the student from Team B gives a correct answer, he will score a point for his/her team; if incorrect, the point will be awarded to Team A. Display the second sentence and repeat procedure with Team B.

Do you Think Translation Exercises are Boring? Just the Opposite!

Name 4: a Game to Energize the first 10 Minutes of your Class