Three years ago, a colleague of mine wrote the word “selfie” on the board. She says none of her students knew what the word meant. Nowadays, even my great grandmother, should I have one, would most definitely know what a “selfie” is, and would probably have taken one or two to send her peers.

It is said that the English language has more words than any other language in the world and it seems it might be true. The Oxford Dictionary Online stores over 600,000 words. Despite this number, new words are coined, clipped and blended all the time and although some of them are very soon forgotten, others make their way into the dictionary.
But how do they choose the words they include in a dictionary? The answer is simple: people need to use them. Basically editors watch the word for several years to see how it is used in both spoken and written English. They check to see that the word is used to express an idea clearly, and that the idea is understood. Then, when the word is seen in writing and speech regularly, it can go in the dictionary.

New words are added every year, but also words that are no longer used are eliminated.

Every year, the Oxford Dictionary selects a Word of the Year. “Selfie” was chosen Word of the Year three years ago. This year, the award has been given to the emoji (plural emoji or emojis) Face with Tears of Joy. The decision to choose a pictogram as word of the year, when it is clearly not a word, has been publicly criticized by many. But despite the selection of this word being frowned upon in many circles, the question to consider is: if words are used to communicate, aren’t emojis also used to communicate feelings and emotions in this new digital era?

Are you up to the challenge? 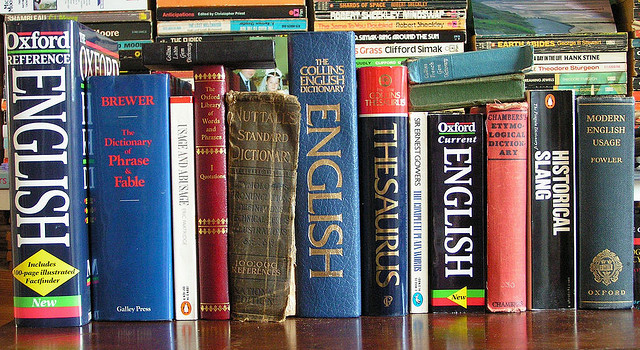 Just the Word - more than a Thesaurus
Speaking: Talking about Jobs
Spelling Revision with Spelling City