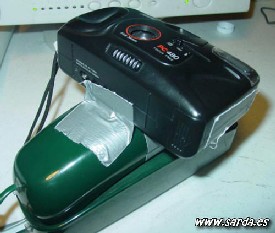 This article has been sent by Estela Álvarez Cortina. Level: Advanced

Technological development has changed our lives and mobile phones are a good example to realize how they have already become a part of our daily routines.

The first mobile phones were only  used  by business people who were working for important multinational companies and travelled a lot. However, it seems that everybody has a mobile phone nowadays.

I think mobile phones are a reflection of the current consumer society. In fact, there are people who buy several mobile phones every year and they boast about having the latest models. Obviously, firms don’t miss this opportunity to increase their profit and they often bring out new devices, every time more sophisticated. Those first huge gadgets which had heavy batteries are past history because they were absolutely different from the modern mobile phones, which are light, very small, tiny, and you can carry them on your pocket.

Moreover, networks want to seek  new customers, so they offer attractive bargains and discounts. For example, if you move from one network to another, it gives you a new mobile without paying a single  euro. Or if you sign a contract with a network, you can talk free for two hours a day. In spite of bargains like these, personally I prefer the  pay-as-you-go option because it allows  me to have a better  control over the money I spend. And when I run out of credit I can top up my mobile phone with a simple SMS, so it is very convenient.

One of the main advantages of mobiles phones is that they allow us to keep in touch easily. Actually, years ago, when they hadn’t been invented yet, the principal system of telephone communication were the landlines at home or in the office and the payphones in the streets, whereas today, thanks to mobiles phones, you are communicated wherever you go. You rarely get cut off because, in general, there is a good reception, except in isolated places where the sound can be a bit broken up or when the line is bad.

For me, another advantage of mobile phone is the text messaging system. If you are in a noisy place where it is difficult to hear a conversation, you can send an SMS. It is discreet because nobody can read what  you are typing or the message you have received, as well as being cheap: it cost less than the price of a call.

Although  most of the people use their mobile phone only to talk with other people, we can also use it as an  alarm clock, as a video game, to take and send photos… Certainly, mobile technology is improving all the time and today we can surf the Internet from our own mobile phone and we can download music that later will sound as ring tones.

In my opinion, mobile phones are very useful. I remember when I bought my first mobile phone years ago. That day it got me out of a tight spot because I went to the cash machine to withdraw money and the machine didn’t give me back my credit card, so I used my new mobile phone to call the bank and cancelled it.

But on the other hand, perhaps mobile phones have a little disadvantage. We have turned into slaves of them, we are reliant on the mobile phone and I think few people can live today withthout one nearby. I don’t understand people who are hooked on mobile phones and spend all their time talking or sending messages, even when they are driving. They are totally reckless!! I use the mobile phone everyday, especially because of my job, and sometimes I feel like a prisoner with a pair of handcuffs, so I would like to hang up .

On balance, mobile phones have more advantages than drawbacks, they have made our lives easier, but we must be aware of using properly. And finally, I’ll give you some advice: If I were you, I would connect the voicemail at weekends and I would cut off the mobile phone. Believe me, it is a rest.