Back to the grind!!! First days are not first days without a game, are they?

Err scratch that, first days are not first days…  without a game that allows students to brush up their English and have some fun.

Well  I guess a game where they play in teams, gently competing against each other in an attempt to brush up the English learned before the summer, is a step in the right direction, right? 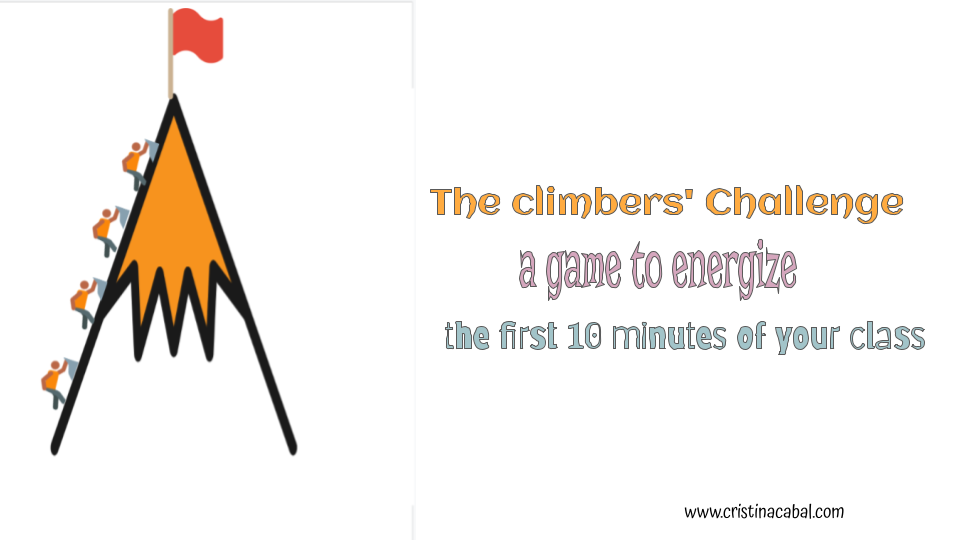 I have invented this game inspired by one I saw on TV called El  Picu (TPA) but, after all the variations I have introduced, I think I have earned the right to rebaptize it as  The Climbers’ Challenge.  As the name suggests,  teams will need to climb a mountain. How does it sound???

Tell students they will need to climb a steep mountain and be the first to reach the summit to plant their flag. On the slope of the mountain, there are “camps” where they can rest. To hike from “camp” to “camp”, they need to win the “round”. You will need something to monitor 60 seconds, which is the time limit for each round.

Here’s how you go about it.

Ask students to form teams of 5ish and name a secretary in charge of writing. On the board, draw as many mountains as teams you have in the class. Ask teams to give themselves a winning name. Assign a mountain to every team.

On the slope of the mountains, decide and draw as many “camps”  – I would go for just 2 or 3 camps -where teams can rest.  To climb to the next camp, teams will need to win the round; the more camps you draw, the longer it will take teams to reach the summit, which is how they win the game.

Deal the first card and explain that teams will have 60 seconds to write at least 4 items of what is featured in the card. The minimum to start playing is 4 items but teams collaboratively can write as many as they know. Remind them that only the designed secretary writes the words.

This is the game we are going to play.

Decide which team starts the game: say it’s Team A. Digitally display the first card. When the time is up, ask Team A to shout how many items they have. Let’s imagine they say 6 items. Now, ask teams: Who can beat 6? Say Team C raises hands and says “we’ve got 9“. Ask: who can beat 9?

Ask the secretary of the team who has the most items to say them aloud. If correct, on the board,  choose their mountain and move them upwards to the next “camp”. If for some reason, they make a mistake, they will climb down a “camp”: this will ensure that teams don’t rush and write things randomly.

At the end of each round, write on the board some of the words they have written, work on their pronunciation and then, ask a conversation question asking students to answer it in pairs or in 3’s, using as many words as possible from the board.

For example, for the card Things you can turn on and off, they have probably come up with the words heating, TV, mobile phone, radio, modems and routers, chargers.. etc., I would ask a question like

Are people these days too wound up in technology?

It’s great to be back! I hope you have liked the game!!!

Miss Universe Contest's Flub: Learning How to Apologize
Weddings
Two Handy Tools that Save the Day

2 thoughts on “The Climbers’ Challenge: a Game to Energize the First 10 Minutes of your Class”