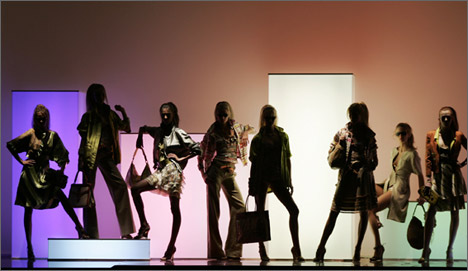 First and foremost, I have to say that I’m not the kind of girl who is hooked on shopping and on designer clothes because I’m convinced that you don’t have to wear brand clothes to be dressed up or to be cool, actually, a lot of brand items aren’t cool at all. I mean, usually, while I’m looking through some magazines I realise how spaced-out film stars are, because they put on such ugly gear that they look really scruffy and badly-dressed, don’t they?
On the one hand , having brand clothes is surpassing the boundaries because as far as I know, there are people who blow their money on buying these clothes instead of saving it for a rainy day, and in the end they are broke. From my point of view they just do this to boast and pretend they are wealthy.
On the other hand there are well-off people who can afford to purchase these trendy clothes because of their huge wages. This kind of people usually splash out their money on having everything from a designer name. I believe that people usually fall into the mistake of thinking that if you don’t have expensive clothes you are laid-back and not cool at all. Nevertheless, the truth is the opposite thing, because you are more likely to be spaced out and spoiled if you have loads of expensive things. In my opinion, this sort of people isn’t cool or fashionable , they are posh.
To me being posh it’s not just buying designer clothes, it’s the way you behave, the thoughts and feelings you have…it’s everything! I have to say that as far as I’m concerned purchasing brand gear doesn’t make me posh or spoiled because I’m really down-to earth and sensible and I know that I’m not cooler because I wear one thing or the other. Besides, I often go shopping to unknown places, although to be honest, I have to say that I usually tend to be appealed by brand clothes because I like their designers much more than the bargains I come across in cheap shops, so that’s the reason why I have some fancy gear.
To sum up ,I have to say that in my case, I go for trendy clothes because I like to be cute and dressed up, and I can’t help going window shopping, but this doesn’t mean having everything from a well-known brand. I believe that is a complete waste of money buying a plain shirt which costs you a rip-off and you pay through the nose just because it has a tiny label on it. In these cases I would rather buy one in an unknown shop or at least during sales.

This is real life: a cheeky customer