Thank you again , Liz, for this wondeful post about your hometown.

Buffalo is a city located in western New York. It is located on the shore of Lake Erie and the Niagara River and only a short drive to Ontario, Canada. It is the 2nd largest city in the state of New York after New York City; because of this Buffalo’s nickname is The Queen City. There are a little more than 260,000 people living in the city. 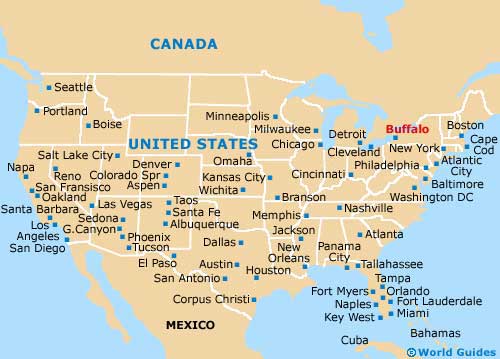 When you hear the word “buffalo” people often think of an animal, the bison. However, if you have ever been to Buffalo NY, you can see that there are no bison to be found. Many people believe that the name Buffalo comes from the French words “beau fleuve” or “beautiful river,” which was probably given to the area when French explorers found it on the Niagara River.

For centuries, the Iroquois and Seneca Native American tribes lived in the area that is now called Buffalo. After colonization and industry became popular in the 1700s Buffalo became an important city for trading because of its location on the water and extensive railroad system. Many steel mills and other factories were located in Buffalo, so by 1900 it was the 8th largest city in the USA. Nowadays, Buffalo is considered a small city and its main industries are education and health care. Buffalo is home to many universities and people come from all around New York, Pennsylvania, and southern Canada to attend the colleges in Buffalo.
Things to do in Buffalo

Buffalo has many things to do both inside and outside. In the winter Buffalo is cold and snowy, with average winter temperatures at about -5 degrees Celsius and about 250cm of snow each winter. Therefore, there are many resorts where people can go skiing, snowboarding, sledding, and ice skating. You can also go to the Albright Knox Art Gallery, Shea’s Performing Arts Center to see a play, or Kleinhans Music Hall to see a Buffalo Philharmonic Orchestra concert. There are also many malls, movie theaters, and restaurants to go to.

In the summer Buffalo is warm and humid, with average temperatures at about 25 degrees. Buffalo has a beautiful waterfront, where you can walk in the park by the marina, go to the beach, or go to Niagara Falls. Niagara Falls are the world famous waterfalls that form the border between the United States and Canada. The Horseshoe Falls (Canadian part) are the most powerful waterfalls in North America. While at Niagara Falls you can ride on the Maid of the Mist boat and look up at the falls or walk on a wooden path on the rocks below the American Falls which is called Cave of the Winds.

Buffalo residents are passionate sports fans. They “eat, sleep, and breathe” Buffalo sports. Buffalo has 2 major league sports teams, an American football team, the Buffalo Bills, and an ice hockey team, the Buffalo Sabres. All the games of both teams can be seen on TV. The majority of the games are sold-out, which means all of the tickets to see the game played have been sold. The Bills went to the Super Bowl 4 times in a row, but have lost all four times. The Sabres went to the Stanley Cup finals twice, but also lost both times. Even though Buffalo teams have never won a major title, their fans never give up, always thinking “there’s always next year,” and remain positive and hopeful that the following year will be a luckier one for the Buffalo teams.

Buffalo is a city rich in culture. There are many different people with various heritages from all over the world such as Italian, German, Irish, Polish, Greek, Hispanic, Jewish, Indian, and African American. Buffalo’s cuisine reflects the mixture of cultures it has. There are many restaurants devoted to each type of food as well as many restaurants that serve a mixture of all types.

Buffalo is also famous for many “American” foods such as chicken wings. Chicken wings were 1st served in Anchor Bar in 1964 and are now served in restaurants around the world. There is even the National Buffalo Wing Festival in which all the local restaurants cook their wings so everyone can try a little bit of each type. When you come visit Buffalo make sure to taste our pizza, Sahlen’s hot dogs, beef on weck sandwiches, sponge candy, and pastry hearts, foods that you can only find in Buffalo.