My intention when I started writing this article was to show how I was planning to integrate QR Codes in my classes but then I realized that there was much explaining to do before this article served its purpose. I am familiar with QR codes but I wondered if my readers were. For this reason, I have decided to split this post into two.Here you’ll find the theory , and in QRCodes Part 2 (coming shortly) you’ll see some of my ideas to introduce them in the classroom, or rather as homework ,as students in Spain aren’t allowed to bring their mobile devices to the school.

It was not that long ago when I saw for the first time a QR Code . I remember I was in Ikea and thought … what the heck is this? And then I thought … Do I really want to know? And then some time later…. But are they really here to stay?Now, it’s crystal clear to me that QR codes are here to stay and I am only beginning to test their potencial in education.

But what is a QR code ? QR is short for Quick Response (they can be read quickly by a mobile phone)They are white and black barcode squares that can be easily generated and that allow you to encode text , urls, images and audio files among other things – lately they have become more sophisticated as you will see below. Now you can only begin to imagine the possibilities for education.

But how do we generate a QR code?

Nothing could be easier. If you google “QR code generator” you’ll find lots . The ones below are just some of them:
Kaywa QR Code ( it allows you to encode URLs, text (160 characters), phone numbers,sms.

GO QR.Me  (same as above but it allows you to encode 300 characters) 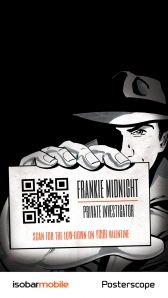 Now, we all know about QR codes: they are black and white squares, containing encoded data. Boring, isn’t it? Why don’t we decorate and make our QR code more stylish ?

QRstuff is definitely my favourite

VisualLead lets you integrate a QR Code into an image , blending QR Codes with a design or image of your choice

Now , we have created our QR code. What’s next?

GETTING A QR Code Reader

Lots of modern phones can read QR codes but first you need to download a QR reader/scanner. For example , in my mobile I have installed AT&T Code Scanner but there are lots of them you can download for free. For iPhone, Scan is a good one, and for Android there’s QR Droid.

HOW TO SCAN A QR CODE

To scan the codes, all you need is a mobile device with a camera, and a QR code reader or scanner app to interpret the data in the code. Open your QR reader on your phone or ipod and center the QR code within the frame provided and let the magic begin!

Holding your breath for Part 2?

Useful Posts to Revise for Finals
A dream come true: Casa MariFalcón
Convert Word, Excel, PowerPoint, Images, Web Pages and other files to PDF and the other way round