Are you in exam mood already? I hope you are just with your nose in you books and practising Speaking  in front of the mirror.

Here is another example of picture description at Intermediate level, kindly sent by Fedra Neila Moro. Thanks Fedra, well done!

The first picture shows a group of people sitting on chairs, in the middle of San Marcus square in Venice. The square is full of water, so they are wearing swimsuits. They look pretty funny and carefree, despite being in the water.
The second picture shows a child with his back to us. It looks as if he is staring at the dry 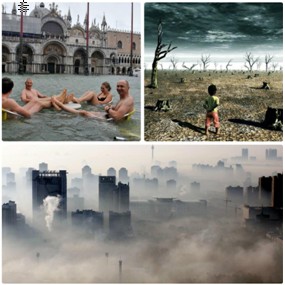 landscape in front of him. Maybe, he is worried, thinking about his future and the horrible scenery, although it is difficult to say, because I can’t see his face.
In the third picture I can see a modern city with skyscrapers. It looks like quite a polluted city. Its sky is completely full of thick smog.
Currently, carbon pollution is the main reason our planet is getting hotter, increasing the risk of weather disasters, drought and flood, and damaging our health.
Since the past century scientists are warning us about the dangers of global warming.
In fact, lately, in the north of Spain, winter is being especially hard and extreme. For example, three years ago it was freezing for months with temperatures below six or five degrades. Two years ago it was pouring from November until June, and last winter was very windy and rainy. Even some people, who live on the coast, had to leave their houses because huge waves had flooded them.

Personally, I think that global warming not only affects the climate change but also the economic problems. So far, governments have spent a lot of money dealing with the damages caused by weather disasters. However, the most affected, the poorest countries, hardly ever receive enough help.
To sum up, from my point of view , if we want to stop global warming we should change our life habits, for example: we should share our vehicle, take more often public transport, have a shower instead of a bath, and above all, we should teach the future generations to take care of our environment and to protect it.
Finally, in my opinion, perhaps the most difficult and necessary thing to do is changing how we produce energy. We’d better reduce the fossil fuels and use clean and renewable energies, so that if governments don’t take the climate change seriously, in the future, the earth will end up being a big ball of smog.