Everybody knows that mobile phones have changed our society, making our communication faster, but, has it become better?

It’s true that we’ve modified our communication habits, because now we can talk with anyone, no matter where he/se is, but: Do we know the importance of communication? Or do we just do it becauseit’s a habit, a routine? I don’t mean mobile phones are completely bad for us: They help us to keep in touch with our friends and to ask for help in case of danger, and they help other people to find us if there’s an emergency.
But, on the other hand, some people are starting to substitute the face-to-face communication with the mobile phone communication. I mean, they’re trying to “mobilize” our communication. For example: teenager couples send each other, on average, more than fifteen text messages per day! Are we going crazy? It’s the same kind of communication that we should eliminate between friends. A boy or a girl comes from high school. He/She’s going to meet his/her friends half an hour later, but she’s texting all his/her friends to ask them if they have any interesting thing to tell him/her!

As I see it, we aren’t caring enough about how we relate to each other . We’re addicted to our mobile phones, because we think we can’t live without them 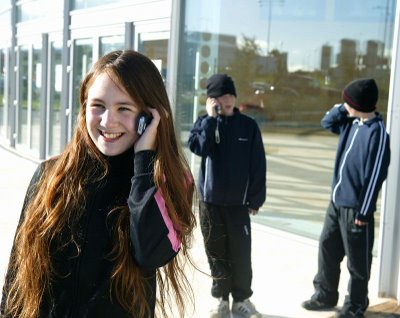 However, there’s something that I consider a very important advantage about mobile phones: nowadays, most of the mobile phones have got a camera and a MP3 player on them. I think that it’s an advantage because it’s a way to keep your music with you at all times and to take photos wherever and whenever you want.
So, if you ask me, I think that mobile phones are a great product, but we should be careful, because we mustn’t be mobile phone addicts

The memorable life of....
Teaching from Afar: an Online Project Using Technology
Students in the limelight