What’s a palindrome?
Although you might not have realized yet what a palindrome is what you cannot deny is that the word is beautiful. It comes from the Greek “palin”= return and “dromes”= path; but this won’t probably enlighten you as regards its real meaning. 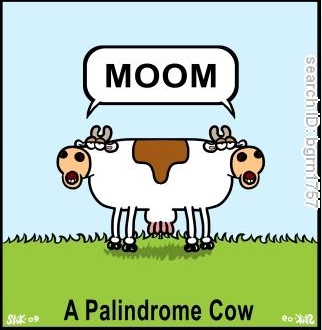 All right, I know you are all on tenterhooks waiting for me to tell you but first of all, I’m going to give you an example … or several to make you rack your brains. I know, I know you’ve nearly finished exams and they have been hard enough but we don’t want you to put your mind at rest just yet, do we? Enough of beating about the bush …here’s the example: “no lemon no melon”.

Can’t see it? Not a clue? Really? Ok, I’m going to give you another example. It is said that the first sentence uttered by a human being was a palindrome. First and second human being? Adam and Eve. So when they met for the first time the gentleman in Adam said to Eve: “Madam, I’m Adam”. Although some people think that Adam was more talkative than this and that what he actually said was “Madam in Eden, I’m Adam”.
Now the penny’s dropped and you know!

A palindrome is a word or a phrase which is the same when read from the start or the end. Mystery solved!!

Can you think of any palindromes? Please do and then send me a post … you can even write a song. You think this is far-fetched? Have a look at this video

Córcholis or it is raining cats and dogs

I am feeling generous

Did you Know....Aged?
A puzzle to rack your brains
Google Set Labs: a language-based experiment