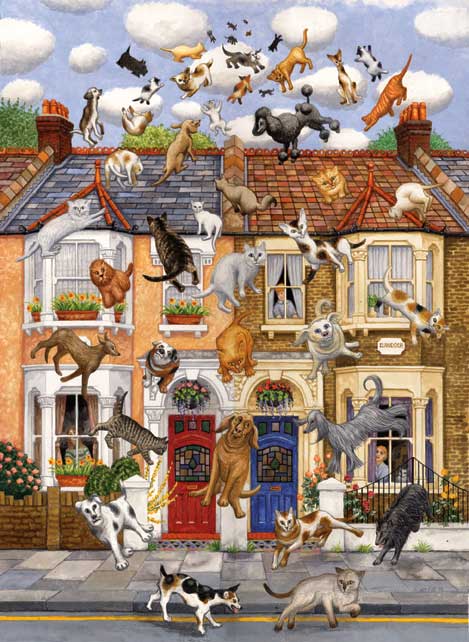 Are you learning Old-Fashioned English?
Only this week I asked my advanced students to write a diary entry, telling them that this was the right time to use non-grammatical structures and any informal expressions they could think of. It was only when one of my most advanced students handed in her paper that I realized my mistake. I caught a glimpse of the expression “ it was raining cats and dogs” and I thought well, well… how are they supposed to know that this expression would sound to a native speaker as “córcholis or “cáspitas” to us?

But there are some others:
Bobbies- The British have not called their policemen “bobbies” for decades.
Whom -Only pedants under 50 will ever use this possessive pronoun.
Gay with the meaning of “happy”- I don’t think a straight happy man would like to be described as “gay”.

If you have little or no contact with British speaking culture, be careful when using colloquial expressions. Probably you’ll be understood only by an English -speaking grandmother.

The good thing is that sometimes words “bounce back”. So maybe in 10 or 20 years’ time we will be using expressions such as “truenos y relámpagos” , “pánfilo” or “botarate” . So ,language can always catch up with us and not the other way round.
Where does that leave us? Well, one of the reasons that native speakers don’t comment when they hear learner say “it is raining cats and dogs” is that learners always look so happy to have been able to use an idiomatic phrase that it seems uncharitable to correct them. Make it clear to the native speakers you interact with that you want them to tell you when your English sounds quaint.

Word of the day: Fuck you